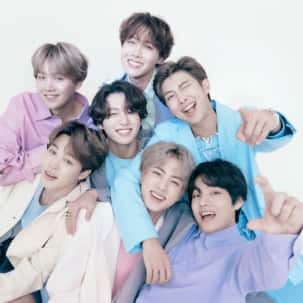 The BTS have a crazy fan following. BTS, or Bangtan Sonyeondan (meaning Beyond The Scene), have gone onto become global icons since their debut in June 2013. The members of the band are RM, Jin, Suga, J-hope, Jimin, V, and JungKook. The septet topped the Billboard Hot 100 chart thrice in 2020 alone, and were also named Time’s Entertainer of the Year last year. The South Korean super band, BTS are all set to release their second English single Butter on May 21 after the huge success of their song, Dyamite. The song is a dance pop track that promises to cater the smooth yet charismatic charm that the group is loved for. The band kept their viewers engaged for over an hour to announce the new single through YouTube live stream. As soon as they announced their song, internet was flooded with memes on BTS. Also Read – BTS: Kim Taehyung’s smouldering expressions in a new footwear campaign has sent ARMY fangirls hearts racing — view pics

Everyone was talking about the K-pop group and were sharing their excitement to hear this song. Twitter was filled with creative memes and fan reactions for the upcoming song. A Twitter user wrote, “They gonna melt our heart.” Another Twitter user posted a picture wearing a yellow coloured t-shirt with ‘Butter’ written on it. He wrote, “I’m so glad I’m on a keto diet because I can have all the butter I want. #BTS_Butter #BTS I just hope it’s organic grass-fed butter. @BTS_twt”. Also Read – BTS: Fans disappointed over the band’s joke being removed from The Falcon and The Winter Soldier finale

I’m so glad I’m on a keto diet because I can have all the butter I want. #BTS_Butter #BTS I just hope it’s organic grass-fed butter.?@BTS_twt pic.twitter.com/SpdY0rGYcN

Earlier, McDonald’s even announced their new signature order collaboration with BTS. This news came as a treat for the BTS ARMY as well as for McDonald’s lovers. We will soon get specialised BTS burgers and entire fast-food meals based on the iconic group at McDonald’s. Also Read – BTS: Jungkook has another FORGETFUL moment and we cannot stop gushing over his goofiness