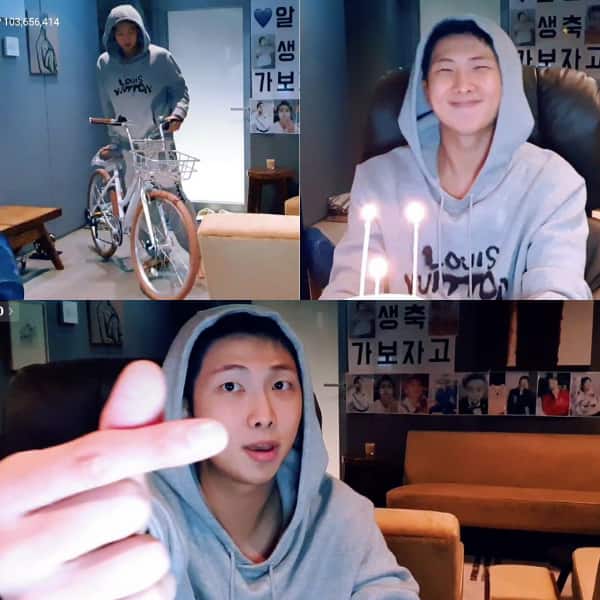 It was BTS’ leader RM, aka Kim Namjoon’s birthday yesterday (12 September 2021). The South Korean rapper and record producer came live today as a surprise to the BTS ARMY. He celebrated his birthday with the ARMY. He brought a cake with him. It was a white cake with a sentence, a message that read, “I believe in your galaxy, RM.” He played the Korean birthday song and seemed in a very cheery mood until he turned in his revolving chair. The candles blew off on their own and Rm’s expression was too funny to handle. He nonetheless pretended to blow the candles after the song finished. RM continuously thanked the ARMY for their heartfelt messages and birthday wishes. And during the live session, the Permission To Dance crooner interacted with ARMY and spoke about a lot of things. He wished everyone who celebrates their birthday in September. He explains he didn’t come yesterday because it was a Sunday, the staff don’t come in, and there is such a thing called “work-life balance” right? Also Read – BTS: Jimin wishes RM with a heartfelt note on his birthday and ARMY is going gaga over their emotional bonding – view tweets

He flaunted his newly gifted bike by Jin aka Kim Seokjin. RM said that the Ephiphany singer assembled everything for him. The eldest member of BTS who seemed to be watching the live dropped a comment later saying that he just assembled the front basket. Furthermore, RM also spoke about his hair colour. He dyed them dark grey this time and though he was wearing a hoodie, he pulled it back a little to show them his hairdo. Just a couple of hours ago, Jimin had posted a birthday wish for him which had a blonde hairdo and the Cypher 3 rapper said that hir hairdo is still a secret. He also added that he couldn’t come closer to the camera as he has a little moustache growing and he hadn’t shaved. (feeling shy, RM?). Also Read – Trending Hollywood news today: BTS wins big at MTV VMAs, Britney Spears gets engaged, Gwyneth Paltrow reacts to ex Ben Affleck and Jennifer Lopez’s love and more

Namjoon revealed that for the past two years, he has been getting the opportunity to celebrate his birthday with his family and was glad for the same. RM said that he was unable to celebrate his birthday with his family before due to work pressure and hectic schedules. Also Read – Did you know BTS’ Jungkook was so ill during a concert that he passed out after the show? – watch SHOCKING THROWBACK video

When an ARMY asked him did he get drunk on his birthday, the bicycle singer said, “I don’t like getting drunk. I don’t like or hate liquor that much?. My favourites are champagne, wine, beer, especially draft beer. I also like Makgeolli (traditional Korean alcoholic beverage).” He asked ARMy to try it out at Korean restaurants. He said that he loved them all and respects and loves every country wherever they are. He revealed that he had some meetings to attend before he went back home. Revealing his birthday wish, he said that he wants to meet ARMY, spread love, ARMY’s happiness, their love, careers, tests and more. He added that due to the pandemic, every day is like a fight. And that he is grateful for all the love that ARMY is showering upon BTS. He hoped that everything gets back to normalcy soon. Before signing off, RM revealed that he is working on his solo songs as well as songs with the rest of the members of BTS. And he expects that as and when everything falls into place, they’ll get to hear the good news soon.