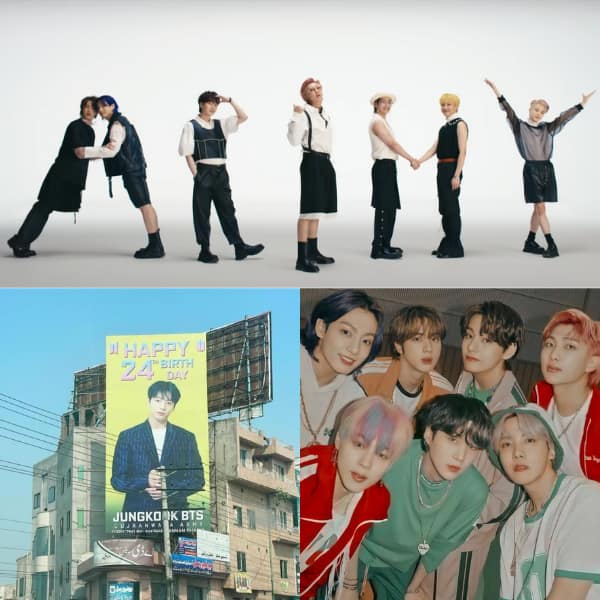 BTS’ Jungkook celebrated his birthday on 1st September, and armies across the world celebrated the same in whichever way possible, just to let BTS and the idols know that they are loved and admired across the globe. Jungkook’s birthday celebrations were in full swing, and some are even on right now. But sadly, as per a report, a billboard featuring a birthday wish for the Euphoria singer was taken down in Pakistan. It so happened that the Pakistani ARMY had joined the celebrations in various cities of their country, but one of them was spoiled by a Punjabi assembly candidate, Furqan Aziz Butt. He told the billboard owner Younus Mughal to take down the billboard, reported Koreaboo.com. It stated that Butt had received several complaints about the ad. He was also quoted saying, “There are young people in this city. This group (BTS) has a negative influence on them and encourages them to behave in wrong activities. They promote homosexuality.” Also Read – Hollywood news weekly rewind: BTS enters the ‘2022 Guinness World Records Hall of Fame’ with 23 records; After 2017’s XXX, Deepika Padukone signs her second Hollywood film and more

The billboard which was supposed to be up for about two days was taken down in a matter of hours, it seems. Pakistani ARMY is upset with the same. This is really heartening to know. Pakistani ARMY has lashed out at this gesture by their locals. Check out their tweets here: Also Read – Trending Hollywood news today: BTS’ Jimin’s birthday celebration plans by Chinese ARMY revealed, Kim Kardashian hurt by Kanye West for washing dirty laundry in public and more

Wtf is this shit? Where were you and Islamic rules when actresses are promoted on these billboards??and when mujra posters are on full fuking display?? Were u blind then u dipshit?do u even know who they’re u bald asshole #apologisefurqanaziz #btsarmypakistan pic.twitter.com/lqtxMeMgNY

Pakistan ARMYS let’s trend this hashtag instead of the other, I myself have made a mistake by tweeting that hashtag. Let’s tell BTS we love them so much

What ever happened about that billboard thing just leave it and like these all Pakistani posts (from #2 to #5) to get noticed by BTS especially the #2 one as this post is about the billboards displayed in Pakistan for Jk. #JungkookOnPakistaniLED #PakistanLovesBTS pic.twitter.com/mYm8986o0n

Why they always do the same with Army’s what’s wrong with them,this is just a poster nothing else so why…
Disgusting people’s??#JungkookOnPakistaniLED #PakistanLovesBTS . pic.twitter.com/xgY3mKw1WS

i’m gonna support and love bts till my last breath, no one can stop me at all ? #PakistanLovesBTS #BTSisPakimysPride #WeLoveYouJungkook pic.twitter.com/sLK1RNf45k

Pakistani Armys!!
A billboard of jungkook in gujranwala was taken off today because some people said it is promoting h0m0sexual!ty…lets tell these mfs that how much we love jungkook and bts and lets trend these hashtags#WeLoveYouJungKook #PakistanlovesBTS#BTSisPakarmyspride

They love us
We Love Them
The Most Precious Bond Forever
We Love BTS ? #BTSisPakimysPride #PakistanLovesBTS @BTS_twt pic.twitter.com/gHS06o2HEO

They always thanking us..they r still down to earth without knowing they actually deserve more than this #BTSisPakimysPride #PakistanLovesBTS pic.twitter.com/ZtH1eEhhr2

Moving on, this was not just only way the Pakistani BTS army celebrated the Still With You singer’s birthday. They also had led projects displayed in Islamabad. Check out their happiness on seeing Jungkook’s birthday wish here:

Glad to be part of such amazing team. Keep supporting BTS. Please donate to our project we will do bigger ones in future Insha Allah ?#JungkookOnPakistaniLED pic.twitter.com/bWPVDWSV2d

Kookie was featured on one of the biggest led in Islamabad. I’m super happy. Kookie deserves the world. I love you kookie till eternity ????????#JungkookOnPakistaniLED pic.twitter.com/dd2HCspo8Y

And this is not it, they even had charity donations as a part of celebrations.

Alhamdulillah done with another charity Project! ?
With the collected Money Our Team is going to visit a Shelter Home ? on this 5th Sept where they will spend time and distribute gifts among orphans and Widows ?
Thankful for your donations #JungkookOnPakistaniLED pic.twitter.com/Pd8GZ8h2Im

This is best way to tell haters we are doing something great!
A project by @PakBTSARMYs on Jungkook’s borthady!#JungkookOnPakistaniLED #PakistanLoveBTS pic.twitter.com/QEKGtke7Za

I LOVE YOU BAN MAY ALLAH GIVE YOU(BTS) ALOT OF MANY MORE HAPPINESS AND SUCCESS?#JungkookOnPakistaniLED pic.twitter.com/GcmXeiDRR9

All, that can be said here is Pakistani ARMY, BTS definitely appreciates this gesture. To quote RM aka Kim Namjoon (whose birthday is coming up next YAY!) “No matter who you are, where you’re from, your skin colour, gender identity: speak yourself.” You have spoken yourself. And we are sure your love and admiration for BTS are reaching them. ARMY with ARMY!