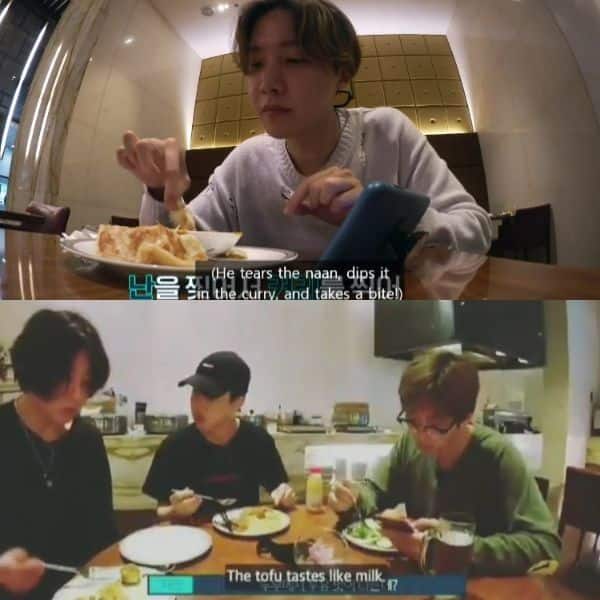 The most popular and loved South Korean pop band BTS has a huge fan following across the globe. Well, the band boys have not come down to India, but it seems they have already tasted few popular dishes that are part of the Indian cuisine. Also Read – Jennifer Lopez and BTS follow each other on Twitter; is a new collaboration on cards? ARMY thinks so – read deets

In 2019 the Bon Voyage season 4 saw the BTS members had traveled to New Zealand. During their stay, a video went viral wherein the boys were seen indulging in delicious Indian food. In this behind-the-scenes video from the Bon Voyage episodes, the BTS members were seen eating naan, curry, and tofu. Also Read – Big Hit Music’s clarification on BTS and Coldplay collaboration for My Universe will break Army’s hearts

Jimin and Jungkook eating paneer.
This is too much to handle at one time??
Indian ARMYs are way too happy now@BTS_twt #BTS pic.twitter.com/7vk9GoeCIC

In the video, J-Hope tore a piece of naan and dipped it in a bowl of curry. While, in another video, Jimin and Jungkook were seen talking about a dish that is made with milk. “The tofu tastes like milk,” Jimin told Jungkook in the video. Jimin offered the same to Jungkook who looked a bit confused and said, “I think it’s tofu but it’s tastes like milk.” Also Read – BTS: Suga REVEALS he almost drowned in the ocean as a child; Army will find Jimin and J-Hope’s reaction relatable AF

Well, the boys have assured their fans in India that they would come down once everything gets back to normal.